It’s with great sadness that we report that one of WEORC’s founders, Jim Wilbur (85), entered into eternal life two weeks ago. Jim was living at Bethlehem Woods in La Grange with his dear wife, Joan (nee Johnson). Jim was a long-time resident of Evanston.

Jim was ordained in  1956 for the Chicago Archdiocese. Even when he did leave active ministry, his love for the Liturgy and organization never left him. Eventually he became the editor-in-chief at JS Paluch Company. He worked with Marty Hegarty in founding WEORC in the late 1970’s and put together the first WEORC directory. He was a stalwart presence in helping many transition from clerical and religious life to careers in the secular world.

His funeral Mass was held on Saturday, February 28, at the Congregation of the Sisters of St. Joseph Chapel, 1515 W. Ogden Ave., LaGrange Park. Memorials to Sheil Catholic Center at Northwestern University appreciated.
Posted by Word From WEORC at 8:47 PM 2 comments:

Talk about a head-scratcher. I wonder if anyone in the recognizes the absurdity of all this?

Another case of a priest leaving to get married, being replaced by a married priest – in this case, a former Anglican priest who with his wife and family, entered the Catholic Church. There were several cases of this in when the Anglican Church started ordaining women. Full details can be found in the Tablet article at…

’s Cardinal George ordained a dozen priests on May 17th – one of the largest ordination classes in the this year. However, that is a far cry from the 30 to 40 that were ordained annually a few decades ago. And they can scarcely replace the 31 priests that died in 2013. The continued decline of traditional clergy was reiterated in the recent newspaper article in . Perhaps a new kind of priesthood is needed. 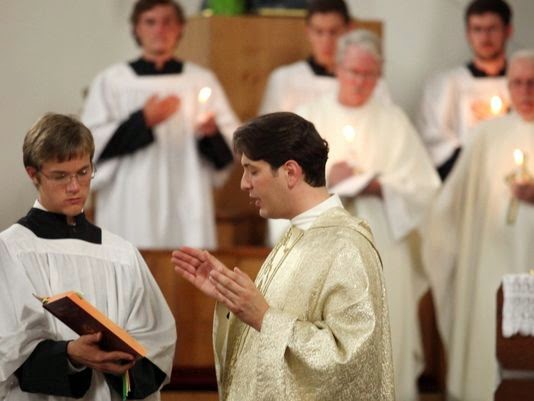 (Photo: Jack Hardman, The () News-Press)
, -- Nationally, one in five Catholic parishes does not have a resident priest.
's Catholic population is rising by 1 percent annually, but seminary enrollment is flat. An inadequate supply of priests already has forced hundreds of parishes to close or consolidate.
Priests aren't getting any younger, either. Their average age is 63.
Something's got to give.
"These people have served the church for 30, 40 or 50 years, and now they are retiring or dying and leaving the priesthood," said Mary Gautier, senior research associate with 's Center for Applied Research in the Apostolate.
In the Diocese of Venice, Fla., though, Bishop Frank Dewane is sitting comfortably for the 59 parishes from to . Dewane has 111 diocesan priests under his authority, along with 60 priests supplied by religious orders. Additionally, between 10 and 70 outside priests, who often are retirees from parishes up North, assist the diocese on a seasonal or part-time basis.
Dewane's focus isn't covering next Sunday's Mass; he is charged with building the next generation of religious leaders.
"We're blessed right now, but we always have to look at where are we in, say, 25 years or 50 years out," Dewane said.
In 1975, there were 58,909 priests in the . Today, 's CARA puts the figure at 39,600, a 33 percent drop. Meanwhile, 's Catholic population rose from 54.5 million to 78.2 million, a 43 percent increase, during the same period.
Although the 39,600 priests seems plenty for 's 17,413 parishes, it's not. Presiding over Mass is just one of a priest's duties, along with hearing confessions, baptizing babies, officiating weddings, counseling parishioners, conducting funerals, teaching schoolchildren, blessing hospital patients, running missions and more. On Easter and Christmas, some parishes in have a half-dozen or more Masses, often simultaneously on church campuses, to accommodate residents, tourists and seasonal residents.
"I don't know of any bishop who believes he has too many priests," said the Rev. John Guthrie, associate director for the secretariat of clergy, consecrated life and vocations with the U.S. Conference of Catholic Bishops.
Nationally, Guthrie said, the ratio of priests to parishioners in 1950 was 1 to 652, but that climbed to 1 to 1,653 by 2010. That doesn't account for the millions of Catholics who are not registered with a parish or regularly attend services.
"There are fewer of us doing more and more work," Guthrie said.
When schoolteachers are sick or on vacation, a principal finds substitute teachers. The same holds true for a church when priests are needed.
A long-term vacancy at school, however, poses more serious problems: Who will teach students, and will their education suffer because of instability and inconsistency? The same questions arise for a parish without a resident priest: Who will provide spiritual guidance and manage the parish? In some cases, the answer is no one.
"There are places where they only hold Mass once a month because that's the only time you can get a priest," Gautier said.
The recent sex abuse scandals certainly had an impact on the priesthood, damaging the reputation of priests and possibly keeping some men from considering the priesthood.
"Did the scandals hurt? Yes they did," said the Rev. Cory Mayer, vocations director for the Diocese of Venice and parish administrator at Ave Maria. "There were victims, and justice needs to be served. But the good young men see the scandal wasn't part of the church or its teachings."
The Rev. Rafal Ligenza, parochial vicar at St. William Parish in , was raised in , the homeland of Pope John Paul II. Consequently, priests are among the most-respected professions for Polish boys deciding what to do with their lives.
"Here, it's being a doctor," said Ligenza, 32. "There, it was being a priest."
Mayer counsels youth and adults who are contemplating possible roles within the church. The first and most important trait he seeks is a deep love for God. Beyond that, a potential priest must be willing to give himself to Christ, realize he will forever serve the church and be humble.
"The worst thing we can have is an arrogant priest," Mayer said.
Beyond established religions with large, permanent church buildings are a growing number of unofficial or unsanctioned religious gatherings in parks, strip malls, beaches and schools.
Deborah Rose-Milavec, executive director of Ohio-based FutureChurch, said people still want to pray and religious leaders still want to lead a congregation, but the has steadfastly remained traditional and expressed no interest in allowing married or female priests.
"Church is happening, and it will continue to happen," Rose-Milavec said. "The big question is how will the official church respond."
FutureChurch's position is that the should consider married men and all women for leadership positions, including ordination.
"They could be brought into roles where they aren't just making coffee, but making decisions," Rose-Milavec said of women.
Pope Francis is at least willing to listen. In October, an advisory board of bishops will gather in for a summit titled "The Pastoral Challenges of the Family in the Context of Evangelization." There, Catholic leaders could discuss the issues of marriage and women's roles within the Church, although change is not considered imminent.
resident Gerry Mater, 74, said he's not opposed to the opening the priesthood to a larger group.
"It's the work of the Holy Spirit that will decide that for us," he said.
http://www.usatoday.com/story/news/2014/05/25/us-catholics-face-shortage-of-priests/9548931/
Posted by Word From WEORC at 1:22 PM 1 comment: